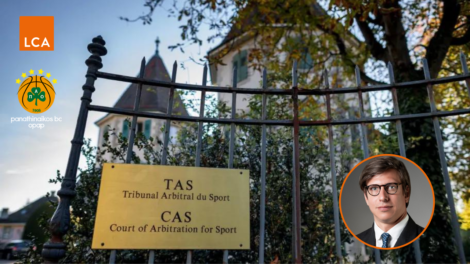 LCA Studio Legale, with a team led by Federico Venturi Ferriolo, has successfully assisted the basketball team Panathinaikos BC and the Greek entrepreneur Dimitris Giannakopoulos, in the disciplinary proceedings before the Court of Arbitration for Sport of Lausanne (TAS/CAS), which definitively rejected the request of the rival basketball team Olympiacos BC to expel Panathinaikos BC from the Euroleague Basketball.

The decision of the highest sports justice body definitively closes an affair originated during a game of the Euroleague Regular Season 2018-19 between the two Greek clubs, a derby commonly referred to as the “derby of the eternal rivals”, so much so that this rivalry has repeatedly crossed sporting boundaries to land in the courtrooms.

The arbitration award is public and will soon be available on the TAS/CAS website.